by Chaya Ben
in Tech
0

Python is a high-level programming language that was created in 1991 by Guido van Rossum in the Netherlands. Python is favored across the world for the following reasons:

According to this StackOverflow survey in 2019, Python is the fastest growing, most loved and most “wanted to be learned” programming languages of today.

The demand to hire Python developers is on the rise these days, especially in the United States, United Kingdom, China and India. With Python as one of the most preferred languages among developers, the community of Python developers are young and on average have one year of working experience. Several prestigious Python projects were created last year like TwitterCleanup or Video Downloader. Now more companies are following suit, recruiting Python developers often.

Currently there are three different main uses for Python:

Scripting involves writing code to automate simple tasks. An example of scripting would be TwitterCleanup. Which was a program that cleaned up social media profiles by keeping active followers and discarding all inactive or bot accounts.

Frameworks such as Flask or Django have recently gained huge popularity among developers. Flask is more flexible, Django is great for time-efficiency. For a junior Python developer, Django can be complicated to learn as it has a number of components to learn.

However, Python developers can handle multiple projects. There are several other usages of Python aside from traditional application development. For example, Python can be used for game designing and desktop application creation.

Thanks to its rise in popularity and favor from developers across the world, Python has grown exponentially in usage, as shown by this prediction model by StackOverflow. Below is the graph for the six most-popular programming languages in the world that are expected to continue growing. 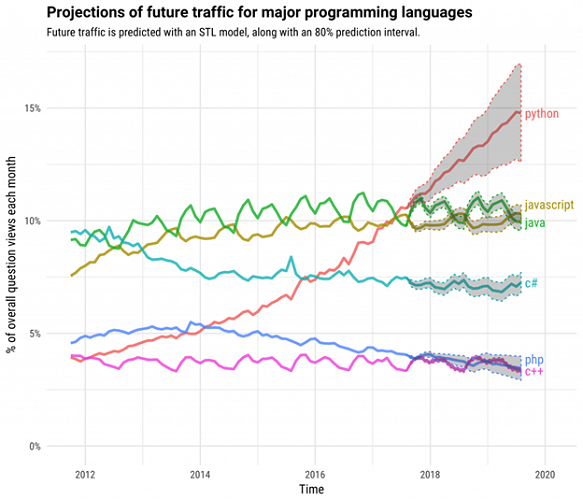 It’s essential that developers understand or are familiar with common Python web frameworks. Ideally they will be proficient in at least two or three of the most popular frameworks for Python such as Django, Flask. Django will encourage clean, pragmatic design, while Flask emphasizes control over development and minimalism.

Python developers require a strong understanding of front-end technology, it’s not necessary but it will come in very handy if the project requires such experience.

There are so many libraries to take advantage of when using Python. Libraries allow developers to perform many functions without having to write code. A broad range of library knowledge is vital as different libraries will cater for different project requirements. An example of some essential libraries a developer should know are: Requests, Pillow, wxPython, Scrapy, SQLAlchemy and BeautifulSoup.

Python is developing day by day, but newer versions are not always better. Older version of a language may suit a project better, but may lack some security features. Experienced developers can find these solutions.

Newer versions may possess the best capabilities but lack support from libraries needed to efficiently complete a project. The best Python developers are flexible and are able to use multiple versions of Python.

How Much do Python Developers charge hourly?

Hourly rate depends on various factors such as: experience, projects handled and framework knowledge. According to Codementor, the average hourly rate for Python developers globally is $61-80, see below:

What Type of Hiring Should You Choose: Freelancers vs Remote Development Companies?

There are a lot of hiring options to choose from, all with different pros and cons. It all depends on project requirements and whether you’re looking for a short or long-term relationship with a Python developer. Here we’ll break down each hiring option:

Hiring freelancers is an excellent option if you want to keep hiring expenses low. But, going too low does come with risks, if the resulting application isn’t what you had in mind, you’ll end up spending more in fixes or have to restart the project. It’s recommended that you get freelancers when you need a Python developer with a niche skill set and you have to pay for it. Stick to freelancing sites like Toptal and Upwork.

Remote teams are more quality assured than freelancers and can still be cost-efficient. Look for reputable companies that offer dedicated developer packages. This allows you to hire a single Python developer and more such as testers, support techs and project managers at a fixed rate. It is a lot more affordable than hiring multiple freelancers, or multiple in-house staff. This option will benefit those whose project requires long-term assistance, a month long project would better suit a freelancer.

One company that offers such packages is CodeClouds. They’re a global development company and have dedicated offshore developers for a range of different programming languages. They’re a great example of the sort of company you should look for when hiring experienced web developers.

Whether you choose to hire a freelancer or from a remote development company. You need to be organised and know how to effectively communicate with and provide direction with your project. This piece on managing developer productivity is a great place to start.

Python will continue to grow and choosing Python for your next project will bode well for the future. Python is in demand and soon there will be a massive population of experienced Python developers to choose from. For now, use the guidelines outlined above to hire Python developers. Good luck!

How Oxygen Caused a Mass Extinction

Is a Fixer-Upper Home Right for You?

Is a Fixer-Upper Home Right for You?

No Result
View All Result